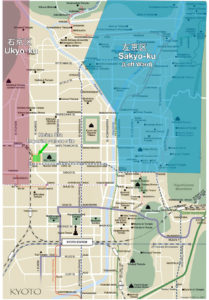 Kyoto is divided into districts called “ku”, usually translated as “ward”. So, in addition to having a city hall, there are ward offices, which is where we go to handle national health insurance and various other clerical matters. Experience Kyoto’s office is in “Sakyo-ku”, with the “Sa” part of the name meaning “left”, as in your left hand, and “left ward” in combination. The funny thing is, look at a map and it’s on the right (east) side of the city. There is an Ukyo-ku meaning “right ward”, and you can maybe guess where that is, over on the left.  So, what does it mean? Why is the left ward on the right and the right ward on the left?

In fact, the names were assigned based on the Emperor’s view from the Heian Era Imperial Palace, called the Dairi, which *was* in the extreme north (the city has grown a lot in the last 1200 years, and the boundaries have changed), and faced south, so left was right and right was left, and it still is. Somewhere around here I have a JTB tourist guidebook in English that reverses the names of the ku, probably because some editor in Tokyo thought he caught a “mistake” that really wasn’t. It’s all relative to your point of view, as with sooo many things. And yes, Kyoto follows the worldwide tradition of having its seedier neighborhoods in the south.

Some notes on Japanese Etiquette 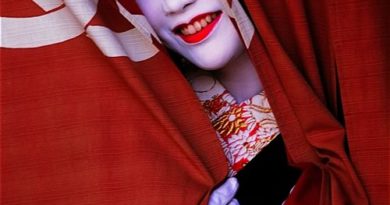 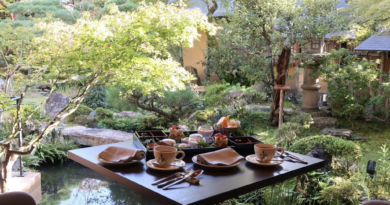